Surfing history: why don’t we learn it in school?

Surfing is an old sport with an amazing history. The exact origins of surfing are not certain, but some say it was first observed by Europeans on a ship in French Polynesia back around 1760. Research suggests that surfing dates back to the ancient Polynesian cultures that existed long ago. According to data collected and many myths, the chief of a tribe was the man who could surf the best. In other words, the top wave rider was the top man in his community. That says a lot about how important surfing was in the lives of the ancients.

Nevertheless, there are two ancient cultures, Mochica and Chimu, which developed in the north of Peru more than two thousand years ago and were discovered thanks to existence of important ruins and architectural complexes. These societies have been the first ones to be related actively with powerful tidal zones, through activities such as transport and fishing. They left us many examples of designs “featuring” waves in the religious iconography and the art expressed on textiles, frescos and ceramics, many of which are scale models of the first crafts made for surfing called Caballitos de Totora.

The ancient Hawaiians, however, left us more accurate evidence of their sport. Petroglyphs of surfers, carved into the lava-rock landscape, and chants that tell the stories of great surfing feats, carried a symbolic lore throughout the generations. Some of these chants date as far back as 1500 A.D., which leads us to believe that surfing may have begun long before this time in the Polynesian culture. What we do know about the origin of surfing in Hawaii is that it was part of the Kapu system of laws, which held Hawaiian royalty above the commoners in the kingdom. Chiefs used surfing and other Hawaiian sports as competition to maintain their strength, agility and command over their people.

The ancient Hawaiian inhabitants looked as surfing as an integral part of life. It was not just a hobby or a job. It was a way of life and an art form for them. Constructing a surfboard was a spiritual process, and great care went into all things related to surfing. The people were fascinated with the concept of taming the ocean and discovering the mysteries buried beneath the powerful waves. The most skilled surfers gained prestige and respect in society. Eventually many upper class Hawaiians created a society that revolved around the sport.

Then Duke Kahanamoku showed up

In 1907, California land developer Henry Huntington asked Irish Hawaiian George Freeth to give a surfing demonstration at the opening of the Redondo-Los Angeles railroad at Redondo beach.

Freeth was also the first person to create a shorter surfboard by cutting the large 16-foot design in half.

His introduction of surfing to the spectators on the beaches of California ignited a revolution in both surfboard design and wave-riding techniques. The California shores soon became grounds for surfing expansion and innovation. Over the following years, the freedom to experiment in size, weight and shape, along with the introduction of fins and Styrofoam, became popular topics for surfers looking to equip themselves for the larger and more challenging surf in places such as the perilous North Shore of Oahu during the winter months. The gentle waves found at Waikiki beach were perfect for the promotion of surfing, but it was the lure of giant waves that prompted the real dares for surfers looking to put it all on the line.

… surfing caught on in the United States. Learning from the ancient ways of the Polynesians, James Matthias Jordan, Jr. brought surfing to the East Coast. He mounted a Hawaiian redwood board in 1912. This took place at Virginia Beach, and this has been one of the main surfing centers in the country ever since. Surfing also caught on in a big way on the West Coast of the United States. Innovations in board design and more public exposure led to an explosion of surfing culture in a few different places. Hawaii, Australia, and California emerged as surfing heaven for those who wanted to pursue the sport and the lifestyle that came with it.

Surfing culture really took off in the 1960s when movies and surf music like the Beach Boys garnered international attention. Southern California beach culture and the surfing lifestyle caught the eye of many people. Competitions developed and a professional surfing community started to take hold. This trend has continued up to the present day. There are now tons of surf shops, events, prime beaches, and an entire subculture that revolves around this extreme sport. Riding waves is one of the most thrilling experiences out there, surfing is practiced in every country that has a coastline nowadays, even those you would never expect, like Iceland and Somalia; so it is not a surprise that people have taken to this sport for countless years. 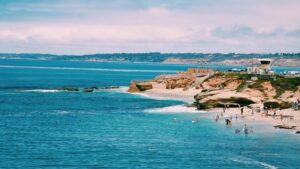 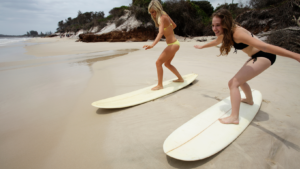